Price- May vary from shop to shop

Hello again dear reader and thanks for stopping by. The cigar we will be looking at today is the Reata by Micallef Cigars, in the churchill size. Sadly, the Reata is our final review of the cigars sent to us by the folks at Micallef, and it has been a real pleasure working with them while doing these reviews. It has been great having the chance to enjoy their cigars.

After reading their description of the Reata, it sounds like the right cigar to wrap things up. I have to say that I agree with something Coby had said to me a couple of weeks ago; that I need to get my hands on some for my personal humidor. Luckily, I have located one such shop that we will be doing some reviews for soon so it has all worked out in the end.

Anyways, back to the Reata.

This cigar comes in a triple cap design. It has a mainly silver and black label with a silver foot label. The color scheme gives the label a metallic or foil appearance which makes it jump out at you. The veins and seam are noticeable without standing out too prominently.

In the area of aroma, I am already picking up on the oak as well a the vanilla in the background. I am interested to see how the combination works for this cigar since I usually enjoy working on a cigar that has a woody flavor in it.

I’ll be using my guillotine for this review, since on my last one I used my v-cutter and had some issues with the draw. I would have liked to try punching it but I have lost my punch. I bought a new one but in turn gave it to a friend who didn’t have one. So now I need to get yet another punch (go figure).

The cut goes clean and even. The draw is open with plenty of flow. As far as flavors go the oak is in front with the vanilla in the background. Let’s see how it goes.

For the light I’ll be using my torch again. Not only do I like it for being a quad jet but also there is a breeze today and I don’t want to waste matches or cedar spills trying to get an even light.

There is no issue with the light. I have a slight lean but not enough to be worried about plus there is plenty of cigar for it to fix itself without having to add more flame.

As with the smell and prelight draw the oak was present but with the light the vanilla has presented itself more. A slight retro hale also makes the vanilla more prominent.

So far the draw is very open and easy. The smoke is also smooth and seems to cover the whole palate with each pull.

Thus far the ash is a light mottled grey with some dark spots in it. It also does not appear to be solid but has lots of cracks in it.

My burn line is evening out as well since I’ve been rotating with each draw. Not razor sharp but it’s getting there and I’m only about an inch into the cigar.

There is very little foot smoke coming off of the cigar. While all this is going on I’ve been trying to keep my smoking pace under control so as not to overheat the cigar.

The woody oak taste is pleasing and has been prominent from the very begining. 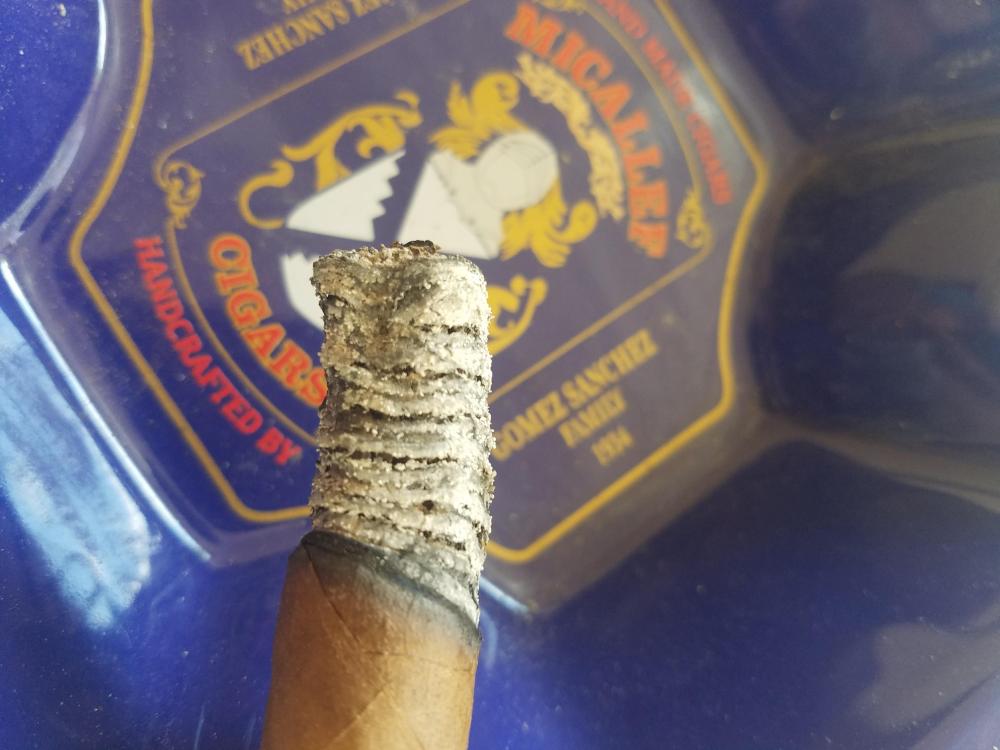 About an inch in I decide to go ahead and ash. I could probably go longer but the ash is leaning more to one side and I don’t really want it to let go all over me.

Even with trying to keep an even smoking pace the cigar seems to be moving along nicely. I was expecting a churchill to take a bit longer, but I’m not far from half way.

When I ashed the cigar warmed up a tad which was totally expected. As new ash is forming it is cooling down which is also expected.

My burn line is still fairly even. Not razor sharp but that isn’t really a big deal for me as long as it’s been close to being even. I also had stopped rotating while my ash was leaning since I didn’t really want to help it along towards letting go.

With the oak taste and the slight sweet of vanilla on the finish, the cigar also has a smooth creaminess that is pleasing. I’ve been noticing it with each draw since I began.

As my ash gets about an inch long I will ash again. I’ve said before that long ash has not been a big deal for me. I’d rather bump it off than have it let go and fall on me.

Like the original, the new ash also has the light grey appearance that is mottled with dark.

While my burn line is getting closer and closer, i notice that the creamy texture from earlier is getting warmer and warmer. Not unpleasant mind you, but warmer.

Had to step away for a second. Reviewing has become harder for me to do since the kids have learned that once I step outside to do one they think they have an hour or so to argue and yell and fight. The end result is usually that for every one review of mine that you read we’ve had at least two “Come To Jesus” moments while smoking and writing.

Anyway, as my burn line is getting close enough I decide it’s about time to peel the label. This is always a tense moment for me because I don’t want to damage the label nor do I want to damage the cigar. All it seems to take is a small bit of glue to touch the outer wrapper and then I could have some tearing issues.

The label comes off with no issues and the back has the same message that both myself and Coby has seen on all the others. 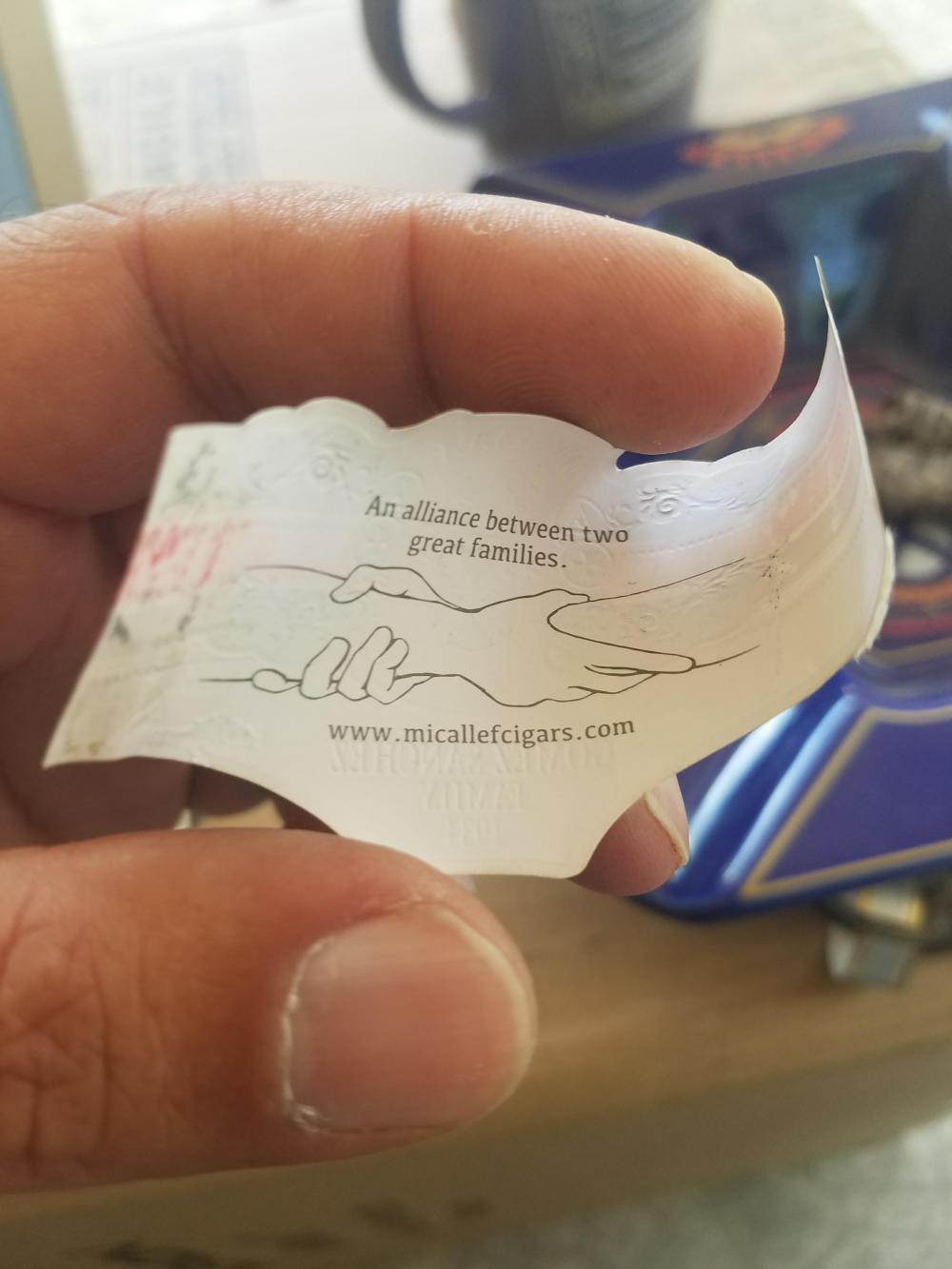 As I saw earlier, there is not much foot smoke coming off the cigar. Even this close to the end.

The burn line never really got sharp but was pretty even without much waviness to it.

There is still the oak taste that has been getting stronger and warmer as the end is getting near, but that was expected. In most cigars I’ve smoked the primary flavor gets stronger as you get closer to the end.

The vanilla has also kicked it up a notch while still staying on the finish.

Earlier I also picked up on the creaminess that has stayed with the cigar while smoking which has also warmed up.

When I last went to task the kids with some chores to do I also fixed a cup of coffee which I don’t normally do but have been pleased with how it has worked with the cigar.

While reaching my usual stopping point of around an inch of cigar left I decide it’s time to set the Reata down and go finish my notes up inside. I usually stop around an inch because I am also not much for smoking a cigar down to the nub. When it gets almost too hot to hold I figure I’ve gotten my money’s worth out of it by then.

The Reata by Micallef Cigars has been a very pleasant smoke. Considered the crown jewel of their line it was named after one of their steak houses. For a churchill size cigar it did not feel like one. It gave me the impression of a robusto and smoked quick enough to back up that feeling.

As they described on their website, the Reata has oak and vanilla tones that was smooth and creamy which was present from start to finish. But feel free to check them out and form your own opinion. This is just what I found as I was smoking their cigar.

This wraps up our reviews for Micallef cigars. It has been a real pleasure to work with them during these reviews and I would like to thank them for their patience with us since we got slowed down by weather, work, and family. This meant that the last ones took a little longer to get done than I had originally anticipated. I hope that they feel they have gotten their cigars worth out of us here at Rictus Reviews.

So what is next on the plate for the guys at Rictus Reviews? I guess you’ll just have to stay tuned to find out. As usual, I’ve been looking for something off the beaten path, or as Tony says the diamond in the rough.

As always dear reader. Be safe and stay smokey out there.

Just a couple of friends, Mark, Tony and Coby enjoying a good smoke and sharing what what we find. View all posts by Rictus Reviews